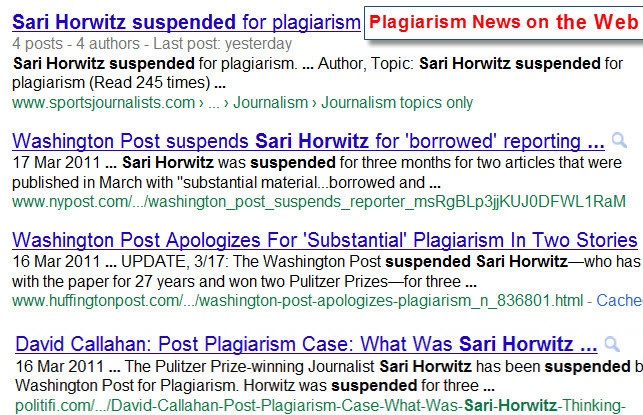 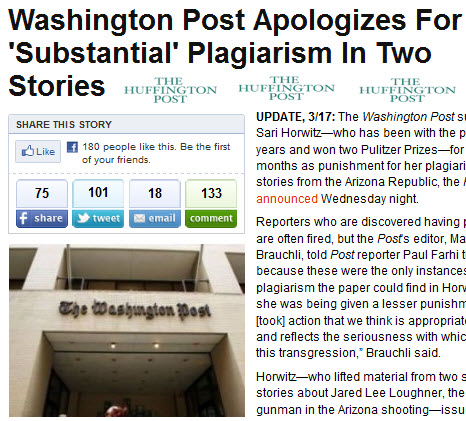 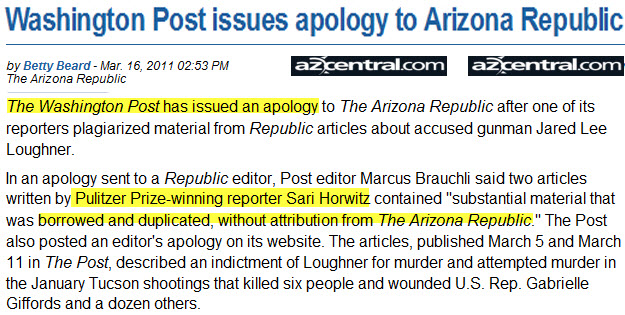 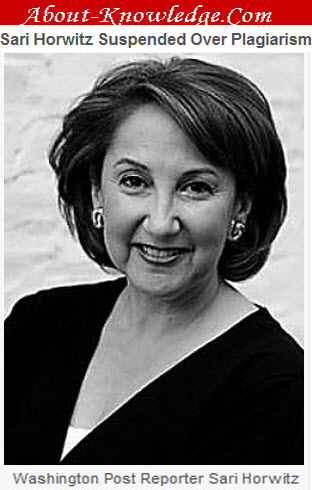 Plagiarism News on The Web; Google finds them all! / New York Post, Washington Post: America reports the case / Huffington Post: This leading Website dedicated much space for the incident / The Arizona Republic: The victim of plagiarism applauds the swift, truthful response from Washington Post / About-Knowledge.Com: All about... Plagiarism!

Depressing news today out of Phoenix and Washington: Yet another serious case of plagiarism that underscores just how widespread the problem of intellectual property theft is. Sari Horwitz, a Pulitzer Prize-winning reporter at the Washington Post, used a few paragraphs from articles of The Arizona Republic without mentioning her source.

But here is the GOOD news: The reporter - a veteran, successful journalist - reacted decently. She was quick to issue an apology and acknowledge her mistake. The Washington Post reacted in kind. The newspaper's editor sent a letter of apology to his counterpart at The Arizona Republic and posted it on the Post's Website. He also suspended Sari for a period of three months.

There is a lesson here. How you react is almost more important than what you did in the first place. But it doesn't always happen that way. When we noted that author Alice Hutchison copied from my daughter Miriam's thesis in a book about filmmaker Kenneth Anger, we were met with nothing but stonewalling and denials from Hutchison and her publisher, Black Dog Publishing of the UK. Years later, they still refuse to shoulder responsibility for the plagiarism and its harsh consequences.

Horwitz and the Washington Post are to be applauded for correcting their mistake instead of hiding from the obvious and making themselves look silly in the process. Black Dog Publishing and Alice Hutchison should take a hard look into the blatant plagiarism they committed and into their shameful pattern of denials and irresponsible reactions. It's never too late to accept liabilty and to offer a remedy.
Guttenberg’s plagiarism was bad enough – author Alice Hutchison’s is even worse

POLITICO and the shameful politics of Black Dog Publishing: Duncan McCorquodale gets a lesson in honesty & responsible behavior / It’s time to accept liability for the literary theft committed by Alice Hutchison