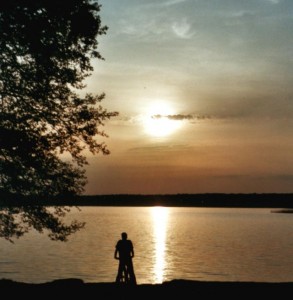 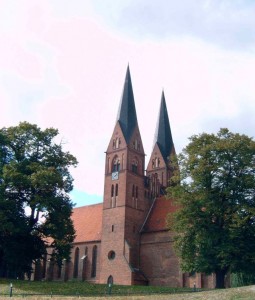 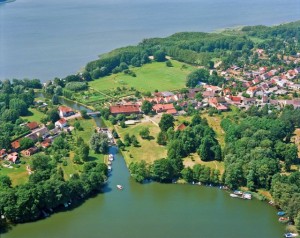 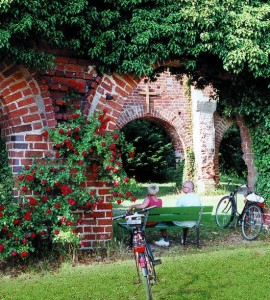 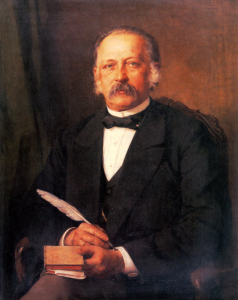 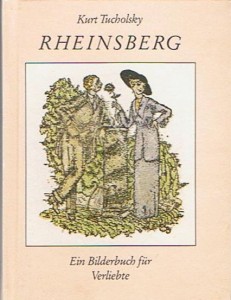 Berlin is wilting in the heat, and everybody wants out. You have to flee the big city just to get air. I fled to Neuruppin, where I accompanied a group of literary hounds from Frankfurt and the professor who is guiding them in their search for new insights on Theodor Fontane, the author who died in 1898 and called this small town home.

Fontane became famous for detailed accounts of his travels in this area called Ruppiner Land. Once, while visiting Kingross in Scotland, he recollected: “Such a beautiful panorama with Loch Leven and its bevy of islands and the castle of the Douglas's, does it not quite overshadow that day you were out on a lake in Ruppiner Land in a rowing boat with all the vestiges and memories of grandiose time around you? And I answered, no, it does not.“

The flattering comparison notwithstanding, Fontane and his well-documented walking tours are just a welcome opportunity to make my own discoveries in this relatively unknown region of Germany, the 'Mark Brandenburg' - and to feel far away from Berlin, choking in record temperatures.

But Germany's biggest city is a mere one hour's drive away: This could hardly be easier.

The air seems fresher in Neuruppin, once an important center of mighty Prussia and now a pleasant, small town of 33,000 residents nestled alongside Ruppiner Lake. It is not, like so many old towns, a maze of tight and winding alleys. This is a place of broad streets, straight lines of sight, and captivating boulevards and squares. They suggest that Prussia's architects, whose leaders included Neuruppin's native son Karl Friedrich Schinkel, worked with care and generosity. They built a town that still stands out, many years after passing its title as a power center to Potsdam, and then Berlin.

The Lion's Pharmacy building, birthplace of Fontane, is now a haven for sightseers. It is surrounded by stylishly renovated buildings, erected by order of King Friedrich Wilhelm II after a great fire devastated the city in 1787.

Beyond the remains of the old city wall are defense ditches that have been turned into refreshing canals where vacationers come in handfuls, but not in crowds, to find respite. Great trees spread shade over the banks.

Neuruppin, a longtime garrison town, carries not only the marks of Prussian militarism, but also of openness to different parts of the world. In the Moorishly styled Temple Garden, statues show that Neuruppin's rulers and inhabitants thought deeply on antiquity and tried to get inspiration from cultures as remote as the Far East.

A short walk leads us to the imposing Klosterkirche, set on the water. The view is of the famous lakes region described so vividly in Fontane's works.

I wonder whether he would forgive me for eschewing the footpaths and driving to the Rheinsberg Palace not far away. If scheduling allows, it would be better to call upon the services of horse carriages, as in old times. I could have also chosen one of the waterways - but more about those soon.

The palace is less known, but to my mind more impressive, than its worldwide famous neighbor Sanssouci in Potsdam, which was the headquarters of Prussian rulers. That's in part due to its relative coziness. Rheinsberg housed the crown princes of Prussia's monarchs, not the kings themselves. It is therefore less imposing and more manageable for the visitor. And its residents lived close to the area's greatest natural treasure - a calm sparkle known as Lake Grienerick that abuts the terraced gardens.

An amphitheater in the castle's park plays host to opera performances on summer nights. In other seasons, visitors can enjoy concerts at the nearby music academy or revel in the 'Long Night of the Arts'.

Rheinsberg Palace bears a woeful history, having been used by the former East Germany as a sanitarium. That very circumstance, though, probably saved it from abandonment and full decay. As it is, some of the murals decorating its walls are remarkably well preserved. Now, everything is being renovated with great effort and affection, and visitors are invited to watch - the project managers courageously decided to leave the facility open even while restoring it.

These lines can hardly be translated. They describe a love scene beginning on a rowboat which a young couple pulled toward the shore of a tiny island. At the end the boy reassures his girlfriend that he has never really fallen in love with another woman... believe it or not.

I made the discovery that you can still experience this story here - provided you bring your own lover. I myself didn't row a boat, but rather took a passenger ship onto Lake Grienerick. Yet nearby, at the Wolfsbruch Marina in the town of Kleinzerlang, watercraft are available for rental. A small boat may carry you in the direction of Tucholsky's love stories; with a larger one, visiting skippers can steer toward Berlin in the South, the northern lake country of Mecklenburg, and points in between.

This is a special situation here, unrivaled in Germany and in the rest of Europe: in the framework of a prototype experiment, Ruppiner Land visitors are allowed to charter and use by themselves motorboats as long as 13 meters and with a maximum speed of 12 kilometers per hour. It takes only a three-hour instruction session to get one in the driver's seat; no license is required.

The Wolfsbruch Marina is also the name of a hotel catering to boaters, who can anchor at the door and rest before embarking on yet another adventure - getting to the landmarks around the Stechlin nature reserve that Fontane reached only by days and weeks of hiking. It can be done on all-terrain vehicles that carry you at up to 60 km. an hour to a nearby lighthouse and other interesting destinations. Martin Blavius, an East German who lost his job after reunification, became an enthusiastic entrepreneur and purchased the tiny vehicles (Germans call them 'buggies') in the United States. He runs his business from his own house in the village of Dierberg, at the heart of a nature reserve that offers everything from speedy driving in open fields to romantic bird-watching on the shores of small and large lakes.

I TOOK A break from all this rushing about at Lake Stechlin. Fine-tasting whitefish are at home in these waters, the region's deepest, and it is worth stopping for lunch here in the beachfront resort of Neuglobsow. On the day of my visit there were so few people here that I thought I had discovered a well-kept secret - though it was admittedly neither a weekend nor a holiday.

In the Mark Brandenburg you can also get a little closer to heaven, and so I set out by car for my next destination - the town of Himmelpfort, the exact translation of which is 'Heaven's Gate.' Suddenly I was surrounded by Stolpsee, Sidowsee, Moderfitzsee, and Haussee. Amid these lakes and all their docks, sluices, beaches, and woodlands, I almost missed the most important feature of this town - the gate.

And here is its amazing story: Himmelpfort would only be a beautiful town with a happy name were it not for the Santa situation. In 1987, children's letters and Christmas wish lists fluttered into the local post office, which actually became Germany's widely known 'Heaven's Gate.' The postal workers obligingly responded in the name of 'Weinachtsmann,' or Christmas Man, as Santa Claus is called here. The exchange soon grew into a popular Christmas tradition that slowly spread into the western part of Germany after reunification.

The Himmelpfort post office received close to 100,000 wish lists in each of the past few years. The tide of mail is willingly managed from the unassuming post office building here - after all, at stake is possible access to the Almighty, even if the former East Germany was officially devoted to atheism.

The day at heaven's gate winds down comfortably at Prussia's Hotel - the 'Preussischer Hof' in nearby Liebenwalde, which lives up to its name with a decorative style and a menu from Fontane's days at the Prussian time which the author described so colorfully in his diaries. More importantly, it rents out bicycles that can be taken on the 630 km.-long green (for trees) and blue (for water landscape) bike trail running between Berlin and Copenhagen, Denmark, which passes through here.

So on the next day, the trek continues by bicycle. Fontane country is ideal for the Sunday cyclist, with flat paths that hug the water and point the way with generous signage. At Zehdenick, the trail crosses over an edge of Germany's largest unbroken woodlands - the Schorfheide - before meandering through many nameless lakes. Within two hours, accompanied by an escort of water fowl, you reach the old brickyard at the community of Mildenberg.

The park is dedicated to the history of brick-making with a museum and an original but now-idle plant. To admire the place, you can switch from your bicycle to an original clay wagon train which used to carry the raw materials to the plant. It chugs through a landscape reminiscent of Disneyland - with the difference being that everything here is real. You can also opt for a ride on the 50-year-old steam engine called 'Lo Wa,' which operates on the first weekend of every month. Or you might walk a few steps to the Havel River, as I did, and ponder whether you trust yourself to take out one of the yachts that are willingly rented there even if one doesn't carry a license.

From here you could even take the waterways back to Neuruppin. It seems like a nice thought to round out the trip with a tribute to Fontane, who is the uncontested author of the idea for modern-day treks through the Mark Brandenburg. So close to Berlin, but so far from the frenzy of the big city.