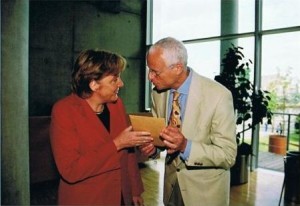 When US President George Bush visits the German town of Stralsund in July, he will likely be introduced to the community's best-known attraction - the Oceanographic Museum in the former St. Catherine's Monastery, in the heart of the old quarter.

The settlement on the Baltic Sea is the constituency of Chancellor Angela Merkel. It's a medieval, beautifully reconstructed town, where creatures of the seven oceans splash around a number of aquariums in a vibrant display of color.

Of all the species on display here, Merkel once told me she is most fascinated with the turtles. I wonder how she would explain her interest in this particular creature to the American president. Is it that politicians need shell-like protections to survive? Is it that the slow-moving turtle teaches patience in pushing through an agenda?

In her ascension from the obscurity of a particle physicist to the top political job of a united Germany, Merkel has in fact developed a protective shell unmatched even by her one-time mentor, former chancellor Helmut Kohl. She has been constantly underestimated, mocked and belittled as naive or incompetent.

In her own Christian Democratic party, dominated by mostly Catholic men from the West, the Protestant Merkel managed to outmaneuver her rivals by simply disregarding their attacks - and sticking to realistic goals that she set for herself. "At each juncture," says a former political foe, now an ally, "her strength was largely based on a sharper analysis of the situation - a capability she acquired in her former occupation. On top of that, she developed an unusual ability to weather attacks against her personality, regarding them simply as part of a stiff competition."

Merkel's performance has been particularly brilliant since the disappointing outcome of the parliamentary elections late last year. In a series of televised debates after the results came in, she was able to capitalize on mistakes of former chancellor Gerhard Schröder, as he tried desperately to retain his job. Merkel finally won the chancellory for herself. Moreover, Schröder assured cooperation and support, and was prepared to share with her his long experience.

Because of the tight election results, Merkel was forced into an unusual "grand coalition" with the rival Social Democrats. Everyone expected from Merkel tough, free-market overhauls that would change the economic and social environment in Germany and adapt the country to the new challenges of globalization. Instead, the chancellor discovered the virtues of patience. The result is slow-motion reform, which authentically reflects the mood of the country. From Merkel's point of view, the process is surely trying - too little, too late, and still too tentative. But it's painful enough for most Germans, and it's taking the country in the right direction.

MEANWHILE, MERKEL is celebrating victories in an area where most observers expected next to nothing: foreign policy. In December of last year, Merkel emerged as a European Union power broker when she convinced the leaders of France and Britain to accept a deal on the union's budget. This underscored her negotiating skills, based largely on her prosaic style, clarity of analysis, thoroughness, and grasp of the issues. But it also reflected her feminine charm, demonstrated so vividly when President Jacques Chirac of France repeatedly kissed her hand in front of the cameras.

One of the reasons for Merkel's emergence as a leading European figure is the expected departure of Chirac and Tony Blair of Britain, coupled with the unstable situation in Italy. At 51, Merkel is young enough to be reckoned with for years to come, and there is no doubt about her ambition to run for re-election.

But the most exciting story is the revival of ties to America and the personal chemistry between Merkel and Bush. In just a few months, Merkel has succeeded in repairing Germany's strained relations with Washington - even though she called for the closure of the Guantanamo prison and criticized Bush in other ways as well. Her against-all-odds biography as the daughter of a Protestant clergyman in Communist East Germany fascinates Americans, and has won her the personal admiration of the president.

The new German role on the world scene is demonstrated best by the effort to curb Iran's nuclear ambitions. Former chancellor Schröder confronted the Bush administration over Iraq and got the cold shoulder when he openly demanded a seat for Germany in the UN Security Council. Under Merkel, Germany is a leader among the Western nations trying to develop a common strategy toward Iran. This happened partly because of Berlin's traditionally close ties to Teheran and good relations with Moscow. But it can be chalked up also to the the new trust between Germany and the US and the skills of the Kanzlerin (a new German expression - the female version of chancellor).

Observing the latest developments, a Berlin-based American scholar said: When really important issues are debated, Germany is already a member of the UN Security Council.

Call it The Merkel Effect. Or call it turtle politics. Seen from Stralsund, the shield is securing a slow, but enduring movement toward more influence and weight in international affairs.