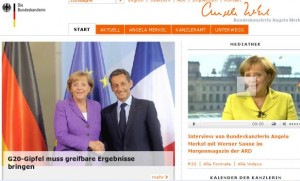 The failure of Chancellor Gerhard Schroeder to win the early elections he initiated has been attributed, rightly, to his economic policies, which amounted to a rollback in welfare

and a loosening of state restrictions on business. The German electorate simply could not accept that Schroeder was delivering the inevitable - tough adjustments that will be forced on them one way or another because of new global conditions beyond Berlin's control.

And so millions of votes indispensable to Schroeder's reelection bid went to the new Left Party, the successor to East Germany's former Communist Party, which called for even more spending and state protections. The resulting shakeup in Germany's political map meant the end of the line not just for Schroeder but also for his popular foreign minister, Joschka Fischer of the Green Party.

Since Schroeder was defeated largely because of his attempt to reform the country’s ailing economic and social system, many in Germany and abroad assume that Berlin will have to abandon his ambitious project, dubbed „Agenda 2010“.

On the other hand  -  according to conventional wisdom -  no changes are likely to occur in the field of foreign policy, where Schroeder enjoyed unshakeable popular support.

Both assumptions are wrong.

Willy-nilly, Germany is about to continue the reform process launched by Schroeder even more forcefully. Up untill now, the outgoing chancellor lacked support for his painfull program in his own Social Democratic Party.  Now it is the task of the new grand coalition to pick up the pieces and to continue the „Agenda 2010“, albeit with some changes.

The next chancellor, Angela Merkel of the Christian Democratic Union, may not be able to undertake the sweeping reforms she initially desired. But simply carrying on her predecessor’s  plan with a comfortable majority in both houses of parliament would represent a huge step forward.

Substantial change is likely, however, in the field where most Germans expect and desire continuity  -  foreign policy.

In the general elections of 2002, Schroeder latched onto widespread feelings of resentment toward the USA. Riding the wave of fear of and objection to the Iraq War, Schroeder wandered down a rethorical path that ultimately led one of his key ministers to equate the Bush administration with the Nazi regime. True, the minister was dismissed. But the anti-US utterances continued nonetheless.

What some believed was merely a campaign gimmick grew to the level of a strategic plan to rally Europe around a new Paris-Berlin alliance. Schroeder spoke of Germany as a Friedensmacht, or Peace Power, and devoted much of his time to mobilize support for a permanent seat at the UN Security Council. France and Germany were to become the center of a United Europe which would project influence worldwide, thereby challanging America’s role as a Super Power.

But developments on the ground derailed the ambitious effort.

Most European countries refused to go along with Paris and Berlin. And the new European constitution – intended to promote a coherent, united foreign policy, and create the office of a single foreign minister for the whole union  -   was voted down and subsequently shelved.

Not surprisingly, the United States rejected Germany’s bid for a Security Council membership. But so did China, and even France, in spite of its new, close alliance with Berlin.

When it came to Israel, the outgoing German government gave the authors of the so-called Geneva Initiative the red carpet treatment and convinced the Bundestag – as the sole parliament in the world  -  to endorse the document. This irritated Prime Minister Ariel Sharon, who at the time was conceiving tangible steps on the ground  -   namely the complete evacuation of all the Jewish settlements from the Gaza strip.

True, Joschka Fischer demonstrated empathy and captured the imagination of many Israelis. But the enthusiasm for him diminished as it became clear that Germany under Schroeder was unneccessarily putting itself on a collision course with the US.

Schroeder, by the way, visited the Middle East several times while Sharon was in office. But never during Sharon’s tenure did he find time to stop by in Israel and thus to demonstrate support for the Israeli leader’s new, bold initiatives.

The Middle East was the region in which French and German ambitions were most pronounced. And it was there that changes on the ground most dramatically refuted their designs. The stiff rejection of American policy was simply rendered irrelevant by the disappearance from the scene of both Saddam Hussein and Yasir Arafat.

As a result, in the past few months both Paris and Berlin have been seeking face-saving ways to abondon their joint posture. At present they are carefully trying to secure for themselves a role compatible with realities emerging in Iraq as well as in regard to Syria, Lebanon and other parts of the region.

The nominated foreign minister of Germany, Frank-Walter Steinmeier, a Social Democrat, has spent years working loyally for Gerhard Schroeder. Yet he also will surely recognize the need to introduce major corrections to the policies of Berlin, the first of which would be an effort to re gain the trust of Washington.

Some in the new coalition emerging in Berlin have called into question the future role of designated chancellor Angela Merkel, saying that under the present circumstances she would not enjoy enough competence to provide the guidelines for the government’s domestic and foreign policies.

This assumption is a wishfull thinking, reflecting the frustration of politicians who were seeking to hold on to their position of power or to replace the new leader sometime soon.

The more likely scenario is that Angela Merkel would establish herself in a strong position of mediating between conflicting interests and personalities in the new political construct.

In the process she will certainly strive to revive the close ties with the US and to be more supportive of practical steps in handling the complicated Middle East situation rather than indulge in advancing futile, unrealistic ideas and initiatives.