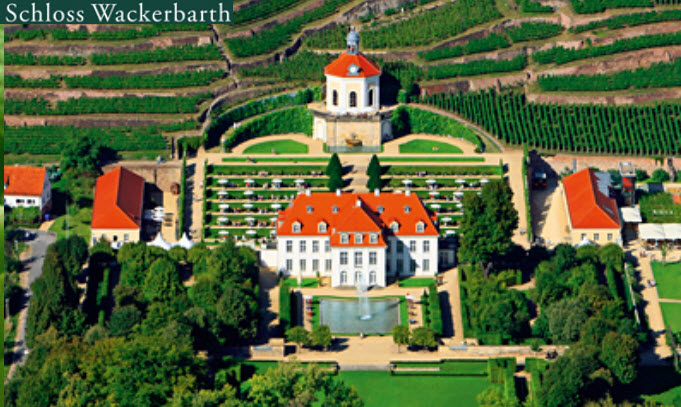 Thousands of vines cling to the steep slope above the restaurant. In the valley below, the Elbe River flows lazily northwest. On the porch, a handful of guests are drinking in the scene - and the wine that is made right here in Saxony.

Among them are cyclists who have pounded their way through the Czech Republic and into Germany on an 860-kilometer (534-mile) trek that ends in the town of Cuxhaven on the shore of the North Sea. They are taking a break now to enjoy some happy coincidences: Albrecht Merker’s wine tavern lies on the Elbe Cycle Path they are taking for part of the way – and Albrecht Merker makes his living not only as a vintager but also as an excellent chef.

This is the town of Diesbar-Seußlitz, gateway to a stretch of vineyards, waterways and castle estates known as the Elbe Wine Route. The region’s international reputation was built not on wine, but on two other exports: fine porcelain, and bestselling novels of the American West by the famous writer Karl May, who visited the U.S. only after they were written.

But this trip is about assets that Saxony could not export: the passion of the Elbe region‘s small vintagers, the breathtaking countryside in which they toil, and the oddities of life in Germany’s smallest, most northeastern wine country - including surprising reminders of the United States.

I had visited the Elbe once before, more than 20 years ago, on a closely monitored hopscotch through the former German Democratic Republic. Neglect hung like a black cloud over the decaying cities and over their people, who seemed dispirited. A few years ago, I moved to Berlin, and marked with fascination the contrast between its flourishing and the slower, more quiet revivals under way elsewhere in the former East Germany. I had long wondered how things were going in the Elbe region. When a conference brought me in that direction, I decided to take a three-day detour and find out.

In many parts of the former East Germany, people felt overpowered after unification by their new, western half. But what I found here was a renewed sense of self-confidence.

Just next door to Diesbar-Seußlitz is a vineyard belonging to Jan Ulrich, who is no cyclist despite his proximity to the Elbe path and the name he shares with a German Tour de France champ. Rather, Ulrich is a young and passionate vintager with several significant awards to his name. My sampling took place in a small room where a transparent tabletop was placed over an old well reaching more than ten meters (11 yards) underground – as far, Ulrich explained, as the roots of the vines.

Albrecht and Ulrich are two of roughly 20 professional vintagers who operate on the slopes of the Elbe River country. They are joined by some 2,000 amateurs who raise their own grapes and bring them to a handful of central pressing facilities to make wine. They keep some of it for themselves and distribute the rest to taverns and restaurants in the region. Not much more can be squeezed out of these 425 hectares (1050 acres) of vineyards, which account for about half a percent of Germany's wine growing area.

The heart of that half-percent is Meißen. With its cozy taverns and an annual wine festival, this town of 30,000 inhabitants serves as a capital of sorts for Saxony’s vintagers. I spent the first evening of the trip toasting their accomplishments far up in the Albrechtsburg, a 15th century Gothic castle. It was the first to be used in any German-speaking area as a permanent residence.

The path to the Albrechtsburg leads through medieval, cobble-stoned streets and stairways beautifully restored to their original appearance. I went inside the castle walls to find the Domkeller, a restaurant whose name means cellar but whose dining area includes a double-terraced patio. Below it, a rough carpet of red-tiled roofs stretches down into the Elbe Valley. With wine swishing in my glass and the river murmuring into the horizon, I found it easy to believe that this was not just a humble scrap of German wine country. This was Tuscany.

A late-night walk among the city’s taverns suggested there is a lot of life under those pretty red roofs. Homes and churches in Gothic and Renaissance styles line the streets and stairways in the city that’s known as the “cradle of Saxony,” because its rulers are said to have originated the region’s unified identity. The marks of decades of Communist neglect have been rubbed out by a fountain of federal money and the mushrooming of upscale stores downtown. Now in its final stages of restoration, Meißen is the most inviting it has been in living memory.

I started my second day by checking out one of Meißen's biggest boasts: its State Porcelain factory, considered one of the world's finest since its opening in 1710. Handcrafted porcelain has dominated the city's economy and decorated its churches and stores for centuries. At the factory, where visitors can watch production and take a course in porcelain painting, the crowd included German schoolchildren and tourists from Japan, the U.S. and Russia.

Later in the day I left the porcelain-paved streets of Meißen behind to visit an estate that was seized from its owners and slowly won back, piece by piece, by their son. Prince Georg zur Lippe grew up in West Germany after his family’s Proschwitz Castle and a nearby vineyard were confiscated by Soviet authorities. After the country’s reunification in 1990, he risked financial ruin to buy back the 55 hectares (136 acres) of property in the town of Zadel and built a business that became Saxony’s largest private vineyard.

Production and sales facilities are housed inside some of the estate’s splendid buildings (the remainder serve as vacation apartments). I met with the vineyard’s director, Peter Bohn, who lamented that too many consumers pay high prices for second-rate wines instead of recognizing the quality of the Prince’s. It was still morning, but a taste of the vineyard’s offerings – including a remarkable sparkling wine – was enough to win my sympathies.

There was another castle on my list that day: the Moritzburg, a 16th century hunting chateau. To get there, I took a century-old steam engine that runs between the towns of Radebeul and Radeburg, with a stop in Moritzburg, and crawls on narrow tracks through the dense forests. Today, the half-hour ride makes for a glorious if slow-paced reminder of railway history. Then, like in a fairy tale, the castle appears on a peninsula in a great lake, flanked by four round, squat towers.

My favorite room? The feather chamber of August the Strong, the Elector of the Saxons and King of the Poles, who ruled at the turn of the 17th century. Tapestries, carpets, bedding – all are fashioned from bird feathers and form one impressive artwork that took 19 years to restore, a project that was finished just a fews years ago.

Fittingly, the hunting chateau is next door to Saxon’s horse-breeding institute and a carriage service that takes visitors to – where else – the nearby tavern, the Waldschaenke. The former East German government often took state visitors deep into the forest to taste the game dishes here. The restaurant and hotel has been run for thirty years by its enthusiastic chef, Hans-Georg Bartscht, who took it over after the collapse of the East German Communist regime. From his balcony, guests can sometimes observe live samples of their dinners romping through the woods.

The Wackerbarth Castle, the third of the day, brought me back to the business of wine. It bills itself as a visitor’s vineyard and has backed up the claim by replacing the walls around its brand new production and storage areas with panels of glass.

In recent years, that allowed over hundreds of thousands of onlookers to learn about fermentation in the bottle and the fine distinction between jiggling sparkling wine, which is good, and shaking it, which is bad. The castle is near the town of Radebeul, where it is pleasant to go for a stroll past still more taverns, or a drink inside them.

Incidentally, Radebeul was the home of Karl May, the novelist who ascended to international fame and success a century ago with tales of the American West and the Arabian desert. May himself did not visit the United States until long after his stories of the American Indian Winnetou and his European friend Old Shatterhand had made him a literary star. The city has preserved his home with its western-style interior and hosts regular celebrations of his life and work.

And, as I discovered on my third day, Radebeul’s border is only meters (yards) away from the major city of Dresden. There, I steered clear of the world-famous Zwinger museum and Semper Opera House, and instead explored the city’s numerous vineyards. My guide was Anke Herrmann, an amateur vintager and the owner of Augustustour, which showcases the Dresden area’s wine industry.

Herrmann drove me to the Pillnitz neighborhood, and we continued by foot up a sloping vineyard that was still well within the city limits. It was only ten in the morning, but Herrmann insisted that we taste what we were seeing and pulled a bottle of the vineyard’s wine from her backpack. Even as a layman, I could tell this one was special. But curiously, it carried nothing beyond the modest label of "country wine." Herrmann explained that the vintager whose property we were standing on was so confident in his reputation that he decided not to waste his precious wine on official judges (who insist on receiving multiple bottles before rendering a verdict).

Later in the day, I lounged for a time in the garden of another neighborhood chateau – the Pillnitz Castle. There, I found two testimonials to the craftsmanship of the Saxons, who claim credit for inventing the coffee filter, the tea bag and roller skates, among other things.

The first was the Bechstein grand piano being played under a giant oak in the castle grounds; Saxony is known for its skilled music instrument builders, and the Berlin-based company moved its production here in 1992, two years after Germany’s reunification. The second was a fleet of side-wheel steamships of the kind generally associated with the Mississippi. But here in Dresden they ply the waters of the Elbe River – the oldest and largest such fleet in the world, bigger than any in the United States.

From the castle, an elegant stairway once used by kings, emperors, and bishops leads right down to the Elbe River. I waited there patiently to catch a ride, but the captain passed me by and docked a hundred meters (110 yards) away at a humble, wooden dock. So I cast my royal pretentions aside and scrambled downstream just in time to get on and see the region one last time from the river that holds it all together – the castles, the forests and especially the vineyards.